Art / „Starve the algorithm“: An interview with William Kentridge

World-famous artist William Kentridge, whom the second edition of the Red Bridge Project is dedicated to, is as comfortable in theatres as in museums and opera-houses. This weekend sees the Luxembourg debut of his latest play, „Sybil“, in the Grand Théâtre. In our interview with the artist, we talked about A.I., postmodernism as an aesthetic for the rich, the pandemic and closed European borders.

Tageblatt: People have often related the palimpsestic methods of your art to the way traumatic history gets buried or covered up. In „Sybil“, you look at the future, not at the past. Is this a sudden change of direction?

William Kentridge: „Sybil“ isn’t really commenting on the future, but it’s commenting on the impossibility of projecting the future. It’s more about the uncertainty than about the certainty of the future. As we all know, even the past is not a fixed set of events. It’s an ongoing process of construction and deconstruction, of remaking and reimagining. The central story of the Sybil, the one that struck me, is the following: You would take your questions to the Sybil in her cave and you’d write it on a leaf and leave it at the entrance of her cave. She would then proceed to write the answer on it, and you’d come back to the cave to pick it up. But as you’d approach the cave, there would always be a wind that blew up and all the leaves would swirl around, so that you never knew if the leave you picked was your fate or somebody else’s. Deep in the heart of the metaphor lies the uncertainty and the foolishness of attempting certainty.

Which somehow links the Sybil to the pandemic …

All the certainties people had – about their economic situation, about their own mortality – have been thrown up by the pandemic. Most parts of „Sybil“ were made a couple of years before the pandemic, in 2018, but it is very much about questions that have come to the forefront in the actual context: How long will I live? What is the future? To what end does it all go? The phrases that make up the libretto of the opera are taken from lines by many different poets, by lines from notebooks, by proverbs from Southern Africa. They’re almost like the leaves swirling around and ending up in a certain order in a book. The metaphor of the page of a book as a leave is at the heart of it, much more than thinking about the palimpsestic nature of rewriting on top of the book.

A.I. has recently become a dominant subject in artistic creation. Why is that so, according to you?

One used to consult oracles to know the future. Now, the oracle is in our pocket. To know how healthy I am, I check my heart rate or sleep pattern. Particular visionaries or seers are now being replaced by genetic analysis. There’s this sense of the algorithm being reliable to know the future. That’s a dismembering of the Sybil.

If we’re talking about prediction and knowledge and certainty, then A.I. becomes an important part of it – but it doesn’t become the sole subject. I’m interested in A.I. because of two things. The first question is: To what extent do we feed the algorithm? One line in the opera is: „Starve the algorithm.“ We try to not give it all the data. But we know that every time we pick up our phone, we flood the world with data. There’s the convenience of what the phone gives us, and there’s the sacrifice of our data. There are statistics that show that, when you apply for a bank loan and you use the words „promise“, „God“, and „family“ (as in „God, I promise on my family’s life I will repay it“), chances are that you won’t be able to repay it. If however in your application, you use the word „university“ and four or more three-syllable words, statistically, the chances are good that you will actually repay your loan. So nowadays, the bank will simply check with the algorithm whether they should grant you the loan or not. That’s an interesting example of handing over agency. It’s fundamentally an authoritarian process because it hands over any individual decision to a statistic average. Before, we relied on individual judgement, on the ability of being able to persuade someone. We relied on being exceptional. We hoped we’d be more than just fitting in with the statistics. With A.I. comes the acceptance of that not going to be the case.

There’s this soviet novel called „Envy“, by Iouri Olecha. One section is about a person constructing the perfect machine – but the machine falls in love and starts singing sentimental songs. The whole project disintegrates. What interests me is the counterpoint to the Soviet project of understanding humans as machines, of understanding human psychology as one part of a machine, thinking that if we could solve that part of the human machine called psychology, we could make human being adequate to the Soviet project. That question of utopia and A.I., of the damage you’d need to do to human beings to make them adequate to utopia, is a question which is touched on here – but that I’m sure I’ll be looking at in future projects.

Zenon, Renoir, Alfred Jarry, and now Sybil: There’s a whole lot of mythology and above all, rewriting in your art. What is it that attracts you to the reshaping of old narratives?

I think that one of the advantages of working with classics such as „Ubu“ or „Woyzeck“ is that you start with something that is very well known, which allows you to make the transformations or shifts all the more apparent. I suppose the basis of it is the conventional kind of colonial schooling I had. These reference points, whether it is Greek mythology or other classic texts, become starting points that come from a million miles away but allow me to look at things much closer to home. Think of „Woyzeck“: It’s about the violence and desperation of poverty. It might not be a universal condition, but it’s a common condition. It’s one that existed in Germany in the 1830s – and that exists in South Africa in 2010. It’s not a huge jump. The conditions are similar. Part of the program we do here, especially the first part, „The Moment Has Gone“, is looking at contemporary conditions of mining in Johannesburg in 2021 and at the conditions of public institutions like the Johannesburg Art Gallery – but it’s also and at the same time a piece about mortality.

Palimpsestic method, disbelief in a master narrative, fragmentation: those are all postmodern notions akin to the way Jean-François Lyotard used them. Would you describe your art as indebted to postmodernism? If not, in what sense does your approach differ?

My sympathies are much more with the modernists as with the postmodernists. Modernists celebrate fragmentation, they don’t see it as a mistake, as destruction, as a way of showing us how the world works. The form of collage – which is a modernist rather than a postmodern technique – seems to me to be the most accurate way of writing history or of understanding how we construct the world inside ourselves. 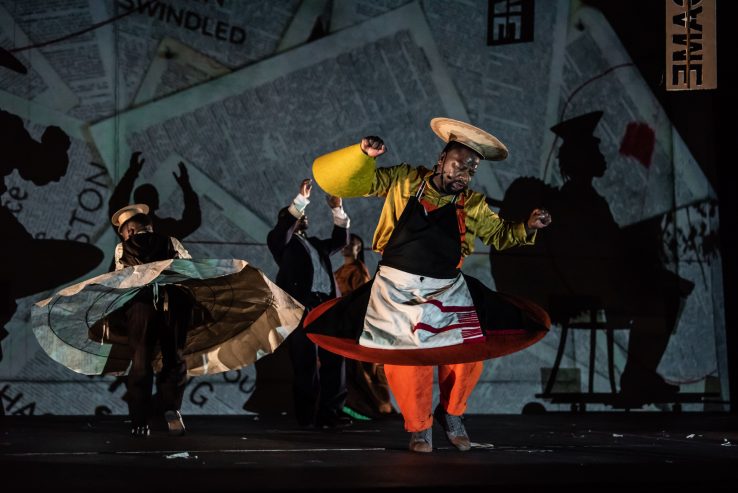 „Waiting for the Sybil“

Postmodernism feels very much like a way of looking at the world from a very wealthy, North-American or European stand-point. Living in South Africa has made very clear the limits of that sense of the world.

That’s my sense of it, of postmodernism leading to a cul-de-sac. One has to go back to different strands of modernism to find the gravitas. The modernist principles of fragmentation or collage are ways of approaching substantive subjects outside of the studio, outside of the making of the art itself.

When art becomes only about itself. If „all the world is just text“, then we are only playing with text rather than understanding the complicated but nonetheless vital relationship between art and the world. Art can’t be reduced to a text. In that sense, postmodernism feels very much like a way of looking at the world from a very wealthy, North-American or European stand-point. Living in South Africa has made very clear the limits of that sense of the world. I think it was Emmanuel Levinas who said that „the physical need of the other becomes the ethical demand of a self“. The conditions that one sees in South Africa can’t be left out. There’s an ethical demand that comes from a physical deprivation.

The Red Bridge Project really is a way to illuminate all the different aspects of your artistic processes – how does it feel to have it all spelled out in such a concise manner?

It was originally quite tight, the grouping of all these different projects. Because of the pandemic, it has spread out. But this last week, we’ve had several companies that were here at the same time: the people that worked on „Sybil“ and „The Moment Has Gone“, the company that does „Paper Music“ and the performers of the „Center for The Less Good Idea“. It was the first time since the beginning of the pandemic that there were 20 of us gathered together, many from South Africa, as well as key collaborators from five other countries. There was a real energy, a sense of possibility. So yes, it’s nice to see the exhibition and the echoes of the exhibition in the theatre. But it’s been much more … emotional than that.

So it wasn’t just an aesthetically satisfying exercise …

It was life-saving for many people. I don’t want to belittle the financial support that the project gives to many of the performers, who’d had no chance to perform for a year, but I think what was quintessential for them was to get a chance to practice their métier, to be on the stage in front of an audience. It doesn’t really matter that it is not a huge audience and that there are still restrictions – but to be able to tell yourself „I’m a performer“ rather than „I’m a person sitting at home waiting“ is just life-saving. As a visual artist, I’ve had my studio and months of quiet working, and it’s been a pleasure, but for all my colleagues who are in the performing arts, for „The Center for The Less Good Idea“, it’s been a very difficult year.

People get into depressions, dancers get out of shape, bodies retreat. Here it seems that you’re seeing the end of pandemic, with things definitely opening up within the next weeks, whereas in South Africa, we’re in the middle of the third wave. Vaccination is very far behind, we’re just beginning now. The pandemic has given Europe a good excuse for closing its borders even further. It is remarkable that Luxembourg is the only European country where what we’ve done would be possible – because they would let us in without long quarantines, because institutions still go on with it even with the audience being so limited. In that sense, it is a privileged spot – for both the people here, and for us coming from Johannesburg.